HONORING HERMAN:  Tribute made to by US Congressmen Conyers, Richmond, and Scott  II  Mural and Banner in North Carolina  II  Mumia Abu-Jamal's Message for Herman's Memorial 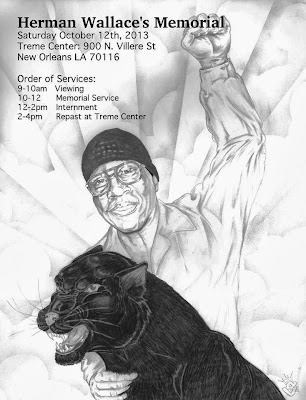 We Speak Your Name

Yesterday, Herman Wallace was laid to rest after a memorial service befitting his liberation roots.  New Orleans supporters, friends and family came together to create a magnificent send off for Herman, just the way he wanted it.

As a proud black man who struggled for justice for himself, his comrades, his people and all people, Herman wanted the remembrance to be in a community space and to provide a forum for many of his supporters to speak and most importantly to bring people together.  As you'll see from the photos below, it was a memorable occasion. You can also read the statement that Albert Woodfox wrote for Herman, featured below.

Rest in peace and in power Herman Wallace - the struggle continues.

Herman Wallace... We Speak Your Name & Those of the Ancestors Herman Wallace would have turned 72 years old today. Instead on October 4th, he died in his sleep, his body ravaged by liver cancer. Wallace had just been released from a Louisiana prison three days earlier after having spent over 40 years in solitary confinement in a 6 by 9 cell. Among his final words, he is reported to have said: “I am free. I am free.” It’s a minor miracle that he was able to die surrounded by friends instead of in a prison hospital. A judge overturned his 1974 conviction for the murder of a guard at Angola prison and ordered his immediate release. Only a couple of days later, while he lay dying in his hospital bed, the state of Louisiana filed charges to re-indict him. There was actually a question as to whether he might be re-arrested. Louisiana was determined that Wallace should die in prison by any means necessary. Yesterday, Wallace was buried and I’ve been thinking again about the fact that some of his final words before dying were about being “free.” Is death the only way for black people to be “free?” As Wallace’s family continues to raise money to cover the expenses incurred by his funeral, one has to wonder if even death can liberate blackness from captivity. This brings me to the story of Prince Mortimer who I have been thinking a lot about since hearing of Herman Wallace’s death. Mortimer died in 1834 in Wethersfield State Prison. He was 111 years old. Prince Mortimer arrived in America when he was 6 years old from Guinea in West Africa. He was enslaved in Middleton Connecticut and imprisoned at 87 years old for attempting to poison one of his masters, a man by the name of George Starr. If not for a brief mention of him in an 1844 book by Richard Phelps titled Newgate of Connecticut : its origin and early history, Prince Mortimer’s story would have been lost to us. Instead, a lawyer turned writer named Denis R. Caron wrote a book about his life titled A Century in Captivity: The Life and Trials of Prince Mortimer, a Connecticut Slave. Frankly the book does a much better job at describing early American prison history than it does at painting a comprehensive picture of Mortimer’s life and of slavery. This is mostly because primary source material about Mortimer is almost non-existent. Regardless, it was through this book that I first learned of him. When he was 103 years old, Mortimer was transferred from Newgate prison which was being permanently shuttered to Wethersfield State Prison. There, he spent his final days in solitary confinement in a 3 1/2 by 7 cell without water or heat. He was still expected to work even at his advanced age. When Prince Mortimer died in 1834, he was buried in the prisoners’ cemetery in an unmarked grave. “He appeared a harmless, cleaver old man, and as his age and infirmities rendered him a burden to his keepers, they frequently tried to induce him to quit the prison. Once he took his departure, and after rambling around in search of some one he formerly knew, like the aged prisoner released from the Bastille, he returned to the gates of the prison, and begged to be re-admitted to his dungeon home, and in prison ended his unhappy years.” As an enslaved black man in America, Mortimer had been prepared for his prison existence. After all, he’d already spent 81 years in bondage & captivity before he set foot inside Newgate prison. Wallace also understood that as a black man, he had been born into a captive society in a state of confinement where his opportunities were curtailed. Yet, there was something in Wallace’s spirit that always refused to be caged. I’d like to think that perhaps Prince Mortimer was by his side whispering, “Hold on, son. Don’t let them break you.” Maybe Mortimer lived & died so that Herman Wallace could experience three days of freedom before his passing. My mother likes to say that as black people living today, we’ve already been paid for through our ancestors’ suffering. I don’t know if I agree. But I do know that Herman Wallace stands on the shoulders of Prince Mortimer. And that I stand on Wallace’s which means that I can see more of the horizon than either Mortimer or he could. Prince Mortimer & Herman Wallace, I speak your names in the hope that those who will stand on my shoulders make it closer to true freedom. --Mariame Kaba is the director of Project NIA. 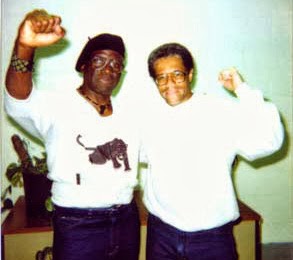 Well, the old man has decided to leave us! I am sure it was a very hard choice for him, who will I serve, the ancestors who have called me home, or humanity whom I love so much?

Old man, was my term of endearment - it had to do with the age of everything - to do with his heart and soul. Herman "Hooks" Wallace was not a perfect human being, and like all men, he had faults and weaknesses, but he also had character! He could make me so mad, that I wanted to rip his head off! Then he would melt my heart with a word, or act of kindness to another human being.

On October 1st sitting in a hospital room, with the other part of my heart (Robert H. King), I tried to will a miracle and it was granted, not the miracle of life that I wanted but the miracle of freedom!  After 42 years of tireless struggle against evil, he was a free man!

I wanted so badly to witness his walk to freedom, but it was not to be, I had to leave, but after losing my mother, sister and brother in law to cancer, I was at peace!

I had a chance to say goodbye to my comrade in the struggle, my mentor in life, my fellow panther and most of all, my friend. Herman taught me that a man can stumble, even fall, as long as he gets up. That it's OK to be afraid, but hold onto your courage. To lose battle, is not the loss of a war!

Herman Wallace's greatest pride was joining the Black Panther Party for self defense! He believed in duty, honor and dedication. He never broke the faith of the party, his comrades or the people. As I bent to kiss his forehead, my heart said goodbye - I love you forever - my soul said - separated but never apart - never touching, but always connected. He was the best of us, as long as we remember him, he lives on.

All Power to the People!

(Photos of banner and mural from North Carolina)