When The Peoples Army Rise, Then The System Will Fall

This Tuesday Nov 2, 2004 "Black Solidarity Day" marks 25 yrs of freedom for our Comrade Black Panther/BLA member Assata Shakur, Our Warrior was liberated from a NJ prison by fellow Comrades (for more info on Assata check out http://www.assatashakur.org/ ) .

Join the POCC and The Drum Collective as we dedicate the "RBG Militant MIC"  (Revolutionary Open Mic)to our Warrior Comrade and celebrate the 25th Anniversary of the liberation of our Sistah!

Hosted by Kalonji Jama Changa w/ Young Chose "Riding Shotgun" on the sounds. This is Revolutionary Edutainment not the same ole' song and dance.  The event is Free!!!

Survival Program (Feed The People) has been switched to Tuesday Nights.  The new meeting place is @ The Royal Peacock (Bottom level) .  If you have donations or would like to assist in preparing the food call M'shaniyah @ 678-461-9884.

We will begin preparing the food @ the Royal Peacock @

PLEASE HELP WITH DONATIONS, WE ARE IN NEED !!!

What do we need:

This is a people program, not a government run program so we need the help of the people.  Make a commitment!  Tell A Friend!!!

WE NEED YOUR SUPPORT, SO THAT WE CAN PROVIDE MORE PROGRAMS!!!

"We ain't got nothing to lose except our chains, and our chains ain't platinum".
-POCC Chairman Fred Hampton Jr. (As told to Russell Simmons at the Hip Hop Convention)
Support the African Anti-Terrorism Bill- Free 'em All! 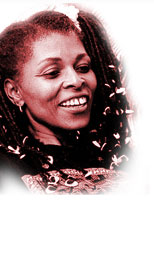 "Black brothers, Black sisters, i want you to know that i love you and i hope that somewhere in your hearts you have love for me. My name is Assata Shakur (slave name joanne chesimard), and i am a revolutionary. A Black revolutionary. By that i mean that i have declared war on all forces that have raped our women, castrated our men, and kept our babies empty-bellied.
"I have declared war on the rich who prosper on our poverty, the politicians who lie to us with smiling faces, and all the mindless, heartless robots who protect them and their property.


Assata Shakur spent her early childhood in North Carolina and experienced the bitter realities of the segregated South. She later moved to the northern part of the country--where she realized that "Black people were equally victimized by racism and oppression."

Assata became a political activist in the upsurge of the 1960s, participating in the student struggles, the anti-war movement, and especially the Black liberation movement. She joined the Black Panther Party and became an active member. The Panthers were a key target of COINTELPRO--an FBI program to carry out operations against the Black liberation movement and other revolutionaries. As Assata recalls inn her autobiography, the COINTELPRO operations and internal struggles led to divisions among the Panthers. Assata eventually associated herself with those like Sundiata Acoli who believed that organizing small, armed, underground groups was the way to carry on the struggle. They were part of a network of clandestine organizations known as the Black Liberation Army (BLA).

The FBI accused Assata of participating in attacks on law enforcement personnel, and this made her a hunted person. Posters in police precincts and banks described her as being involved in serious "criminal" activities. She was high on the FBI's "most wanted" list.

On May 2, 1973 Assata, Sundiata Acoli and Zayd Malik Shakur were ambushed by state police on the New Jersey turnpike. One state trooper shot Assata in the arm and back as she had her hands in the air. Another trooper was killed. Zayd Malik Shakur was gunned down. Sundiata escaped and was later captured after a massive police manhunt.

One of the state troopers admitted that he shot and killed Zayd Malik Shakur. But Assata was charged with the killing of Zayd--who she described as her "closest friend and comrade"--as well as with the death of the trooper. Sundiata Acoli waas also charged with both deaths. No credible evidence linked either of them to the shooting of the state trooper. Their trials were a blatant political railroad wrapped in manufactured hysteria. The two revolutionaries were denied access to the media, while the New Jersey police and the FBI fed daily lies to the press. In 1977 Assata was convicted by an all-white jury and sentenced to life plus 33 years in prison. Sundiata was sentenced to life plus 30 years. He remains a political prisoner today.

The authorities were out to break Assata, if not kill her outright. After her arrest, Assata was shackled and chained to a hospital bed--one arm paralyzed from a bullet wound and another bullet wound in her chest--as police guarding her shouted Nazi slogans, jaabbed her with shotgun butts and threatened her life. In a foreword to Assata's biography, Lennox Hinds wrote, "In the history of New Jersey, no woman pretrial detainee or prisoner has ever been treated as she was, continuously confined in a men's prison, under 24-hour surveillance of her most intimate functions, without intellectual sustenance, adequate medical attention, and exercise, and without the company of other women for all the years she was in their custody."

Assata wrote of her flight from prison: "In 1979 I was able to escape with the aid of some of my fellow comrades. I saw this as a necessary step, not only because I was innocent of the charges against me, but because I knew that in the racist legal system in the United States I would receive no justice. I was also afraid that I would be murdered in prison. I later arrived in Cuba where I am currently living in exile as a political refugee."

The Fight to Defend
All Political Prisoners
In her recent open letter, Assata Shakur said that her main concern is not for herself but the pressing issues facing the people today: "I am more concerned about the growing poverty, the growing despair that is rife in Amerika. I am more concerned about our younger generations, who represent our future. I am more concerned that one-third of young Blacks are either in prison or under the jurisdiction of the `criminal in-justice system'; I am more concerned about the rise of the prison-industrial complex that is turning our people into slaves again. I am more concerned about the repression, the police brutality, violence, the rising wave of racism that makes up the political landscape of the U.S. today. Our young people deserve a future, and I consider it the mandate of my ancestors to be part of the struggle to insure that they have one. They have the right to live free from political repression. The U.S. is becoming more and more of a police state and that fact compels us to fight against political repression. I urge you all, every single person who reads this statement, to fight to free all political prisoners. As the concentration camps in the U.S. turn into death camps, I urge you to abolish the death penalty. I make a special, urgent appeal to you to fight to save the life of Mumia Abu-Jamal, the political prisoner who is currently on death row."

Gov. Whitman claims that the government's pursuit of Assata Shakur is about going after "crime." This is a gross lie. The government of this country always claims, "We have no political prisoners." But, as the Jericho '98 Amnesty Campaign has made clear, there are many men and women who are locked up in U.S. prisons for their political beliefs and actions. Carl Dix, a national spokesperson for the RCP, said in his statement to the Jericho '98 march: "All of them stood up and fought the hell this government brought down on the people in this country and worldwide. Many were down with the Black Panther Party and other revolutionary groups in the 1960s. Some took up arms to liberate the people. The cause they fought for is as just as what Nat Turner, Harriet Tubman, John Brown, and Pedro Albizu Campos fought for many years ago." The fight to defend Assata Shakur from the attacks of the U.S. government is closely linked with the fight to defend all political prisoners.

Assata Shakur was once one of those political prisoners--and her escape from their prisons made her one of the "most wanted" fugitives from their system of injustice. The people must not allow the united snakes government to get their hands on Assata again.
"I would rather be a member of this race than a Greek in the time of Alexander, a Roman in the Augustan period, or Anglo-Saxon in the nineteenth century." - Edward Wilmot Blyden

"However much we may detest admitting it, the fact remains that there would be no exploitation if people refused to obey the exploiter. But self comes in and we hug the chains that bind us. This must cease." - Mohandas Gandhi