So last week after the demonstrations for Oscar Grant, a 22 year unarmed, non resistant father executed in plain view of hundreds by a cowardly BART police officer,Johannes Mehserle who was finally arrested last night after two weeks of us waiting and protesting. we had to endure endless news reports and commentary most likely fed from police accounts and echoed by newspaper reporters who were not even on the scene that suggested that the city was burning and people were out of control. These pundits got on their pedestals and made pompous pronouncements about how the 200 young people who broke away from a larger demonstration held at the Fruitvale BART station in Oakland where Grant was killed on New Years morning, to march to downtown Oakland did irreparable damage.
The reports that went around the world was that over 300 businesses were destroyed and that hundreds ran amok in the streets. Well now we are finding out those reports were GREATLY exaggerated. As was reported on KTVU Channel 2 which was the TV station to first air the gruesome execution, the actual damage was 40-45 windows smashed and a couple of dozen garbage cans thrown in streets mostly on 8th, 14th and 17th, the latter two had been closed off to traffic. There was no looting. No gunshots. No robberies.
What many news reports focused on was the footage of people burning a police car and setting a nearby garbage bin on fire. It made for good television it got people talking and more importantly it got key officials to finally start moving and addressing the situation. Those actions on the streets reflected the undescrible anger that many were feeling especially since up to that point six full days had passed and the Mayor, district attorney, BART officials and other major leaders had made no public announcements to ensure residents that justice would be carried out. No one came forth and expressed shock, horror and grief at seeing such a heinous act. No one came forth and said 'do not worry this will be thoroughly investigated. We did hear from BART police Chief Gary Gee who told us that the video was inconclusive. We did hear from a BART spokesperson that the officer Johannes Mehserle had not been interviewed by officials and was on paid administrative leave.
Shocked residents had to also endure some mainstream outlets like the SF Chronicle newspaper and KPIX TV who tripped over themselves to report early on that Grant had a criminal past and had served time in jail-which in most people's eyes had little relevance to him being shot point blank while he lay face down with his hands behind his back after playing the role of peacemaker and pleading with officers to not shoot him because he had a 4 year old daughter. The manner in which such reporting was done is the equivalent to us hearing about a rape and then announcing to the world that the victim slept around a lot. 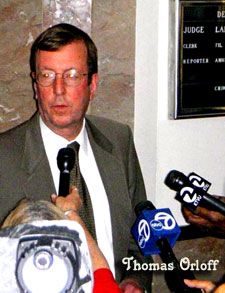 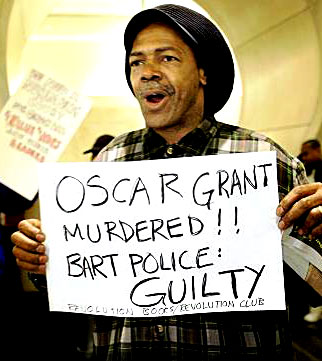 Lastly another criticism being levied by armchair pundits was 'why are folks in the streets about this police killing and not protesting when other crimes take place'? The question itself is faulty because it implies the community doesn't care and that everyone is comfortable with crime. Ray Ray shooting Pookie over drug turf or a petty beef is not something that the average citizen can safely confront. If they are of a criminal mindset then it would be fool hardy to directly confront them.
It also implies that there hasn't been any marches or vigils. Nothing could be further from the truth such activities take place all the time. It was just last week that there was huge march and vigil surrounding the gang rape of a sista in Richmond. There was another vigil/march for a former Oakland resident who came back to visit from Atlanta who got gunned down.. Over the years we seen large marches with organizations like Silence the Violence and Lovelife to name a few.
In addition many of the folks who organized last week's rally are involved with organizations that they formed that try to take preventative measures. In other words they work with 'at risk youth' and try to show them a better way so that they don't ever have to get caught up in the legal system. Some have leadership camps, others have after school programs. Some run training and skill enhancement outfits. It ranges. Sadly those efforts are rarely recognize, by critics who wanna know why we the community doesn't object to Black on Black crime. Some people have argued that such prevention efforts are ineffective because our communities are still saddled with crime. I'd like to remind folks that the billions spent in tax payer money for the War on Drugs, dozens of new prisons in this state along, hundreds of extra cops, state of the art weapons etc hasn't made a dent in crime either. So whats really going on?
The other thing to keep in mind is that the police are there to protect and serve. When they kill or get killed its a big deal. Our tax dollars pay for their training. Our tax dollars pay for their salaries. Our tax dollars pay for their funerals if they get killed in the line of duty. And our tax dollars pay for their defense if they are accused of killing someone or behaving recklessly and brought up on charges.
And lets be real honest right here..this horrific crime was caught on video tape. It was brutal and harsh eye opener for a whole lot of folks. In all fairness, one could make the case that many of the people who came out last week for Oscar Grant have not come out for other police killings even when they were emersed in controvesry. The big difference here was seeing this on tape. It clearly moved people into action.
Hopefully the actions taken are such that it puts a significant dent in this on going problem of police terrorism.